The Ascent Of The Two-Wheeled Vehicle Across Urban Europe.

As soon as I wrote the title, I saw everyone thinking motorcycles. Motorcycles are definitely a bigger deal in Europe than they currently are across America. That’s just a fact of congested traffic in congested urban areas that really weren’t designed for motor vehicles. You can get through traffic faster with a smaller vehicle.

But, where this is technically a travel blog, I’m going to consider two-wheelers more suitable for your daily tourist runabout. These offerings come in the form of bicycles, electric scooters, and mopeds. They have all come on the scene lately as great options for a tourist to bang around a city for a couple days.

Where I’ve seen bicycles for rent in a couple of US cities, I haven’t seen them in the shear volume that I have in European cities. European cities view bicycles with a view that they’re not a novelty.

You can rent at most rental stations with a credit card. Then, when you’re done peddling about, you drop them off at the nearest next rental station. It’s terribly practical. So far I’ve seen the bicycle show in Burgos, Madrid, Geneva, Athens, Santorini, and Tel Aviv.

The electrical scooter, once the domain of anti-social kids, has officially become acceptable and, dare I say, trendy. It’s such a shocking advance that I still can’t get over it.

Much like the bicycle example above, you rent them from a rental station via credit card. Then when you’re done, you drop it off, seemingly, wherever. I’ve seen the scooter show in Athens, and Tel Aviv.

Now, both bicycles and scooters are considered modes of transportation, so they are ridden out in traffic with the rest of the transportation. Yup, you’re just another vehicle.

Some cities have special lanes for bicycles and scooters, but otherwise you’re out in traffic with everybody else. And this is where I have to say that after a couple minutes on s scooter people get fearless. It’s full crazy! Swerving in and out of traffic, arguing with other drivers, talking on the phone, running in packs, riding double, carrying groceries, all on a scooter. Dude, it’s crazy!

You’re thinking that I’m talking about 20-somethings, and lost Middle-ages. Nope. When you see your first 60-something granny cruising on one, you have to question things.

Some cities have specific laws again riding on the sidewalk. Get caught and you pay a sturdy fine. NOBODY CARES about this. Watch when you’re walking around. Definite safety tip.

The longtime champion of the backpacker set, the moped is definitely still a go-to item for efficiently getting around overpopulated tourist towns. Granted, moped’s are still the reigning champions of island hotspots and beach towns. That being said, their ability to cut through traffic and go all day on only minimal gas is making them pop up in urban centers as well.

One dividing line between mopeds and the others, is licensing. Renting a motorized moped is really renting a vehicle. You’ll need a drivers license and whatnot. In most places you’ll actually be asked for an International Driver’s License (available in the USA from AAA for a reasonable fee), so be prepared before you go.

for those that refuse to yield to the conventions of the younger generation, all the standard options are still available. Every Major rental car chain, and a bunch you’ve probably not heard of before, are alive and well.

Most agencies have a stable of smaller cars than the standard American inventory, but that’s because they fit well on smaller streets and in congested areas. Don’t be afraid to go get that smart car. You’re not buying it, it’s a rental.

Now, with all that being said, you get out there and find some way to get around town. Have a good time. Go crazy. Just not with the scooter, on the sidewalk. Cause – I’m walking here! 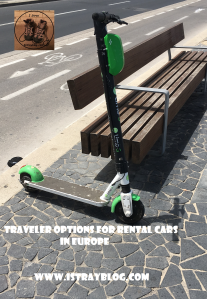